Approximately 70 days since the last whistle blew, the Bundesliga roared back into life on Saturday as German football was allowed to restart in earnest after its coronavirus pandemic-enforced hiatus.

Perhaps “roared” isn’t the right word, as all matches were played behind closed doors in the interest of public safety — leading to odd, eerie atmospheres around the league.

The headline fixture saw Borussia Dortmund welcome old rivals Schalke to an almost entirely vacant Westfalenstadion for the first Revierderby of the decade, and possibly the weirdest atmosphere of any meeting between the pair.

Here is our pick of the best photos taken at the various Bundesliga games that took place in total on (re-)opening day. 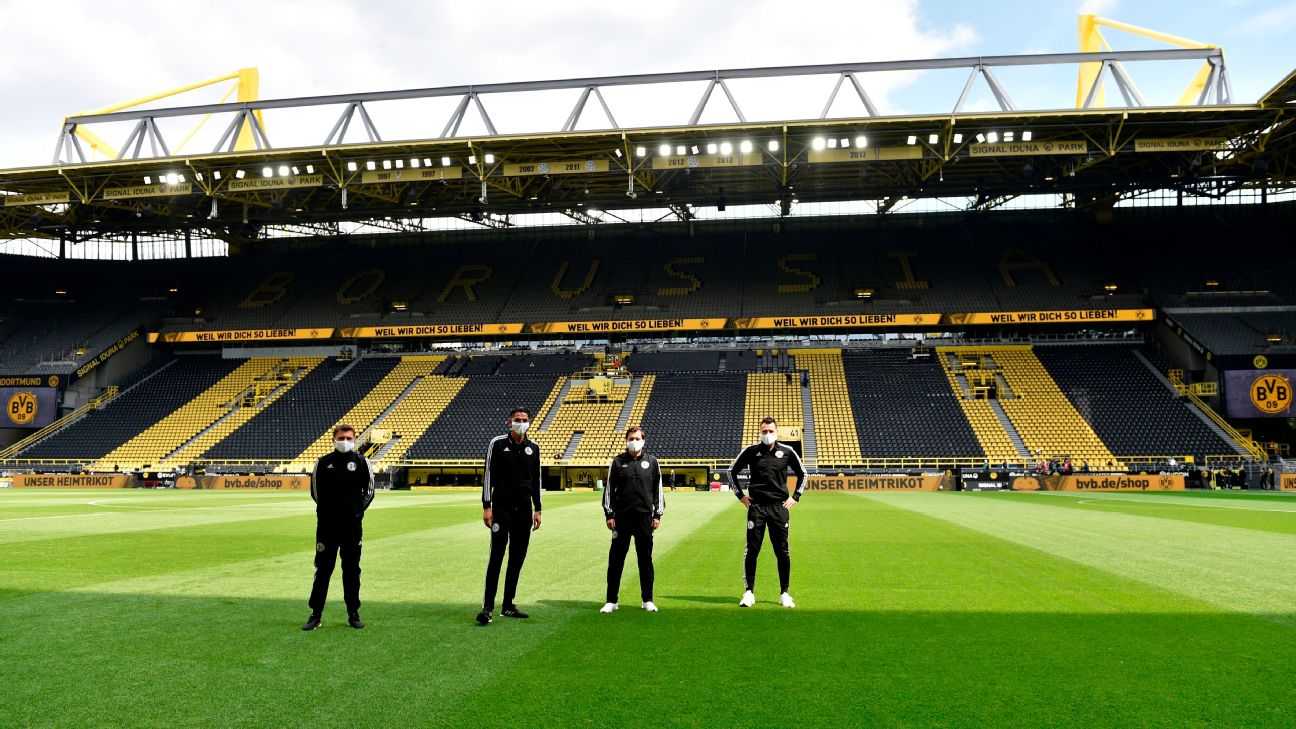 Referee Deniz Aytekin and his team of officials take to the Dortmund pitch to go through their pre-match protocol while observing social distancing. 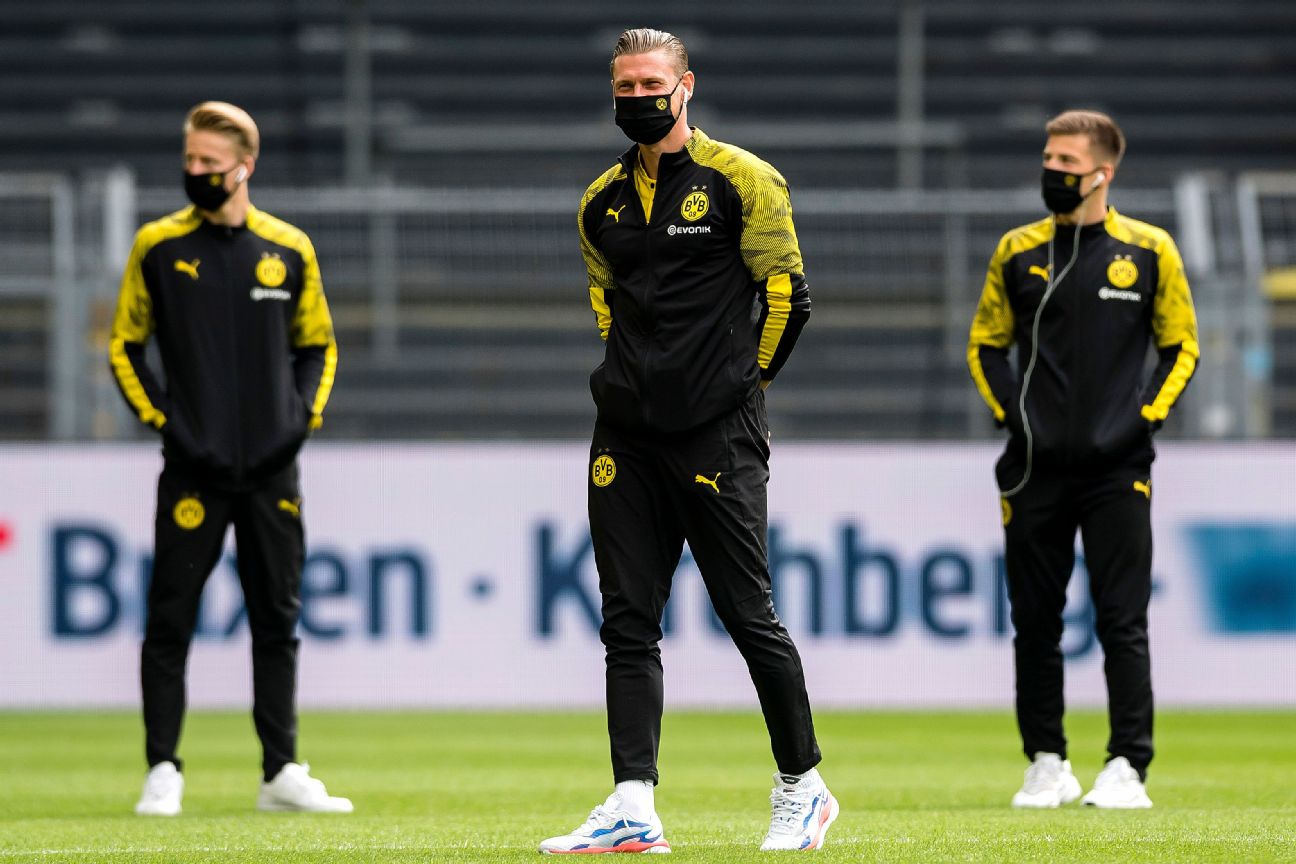 Lukasz Piszczek and Marco Reus were among the Dortmund players wearing club-branded protective face masks ahead of kick-off. 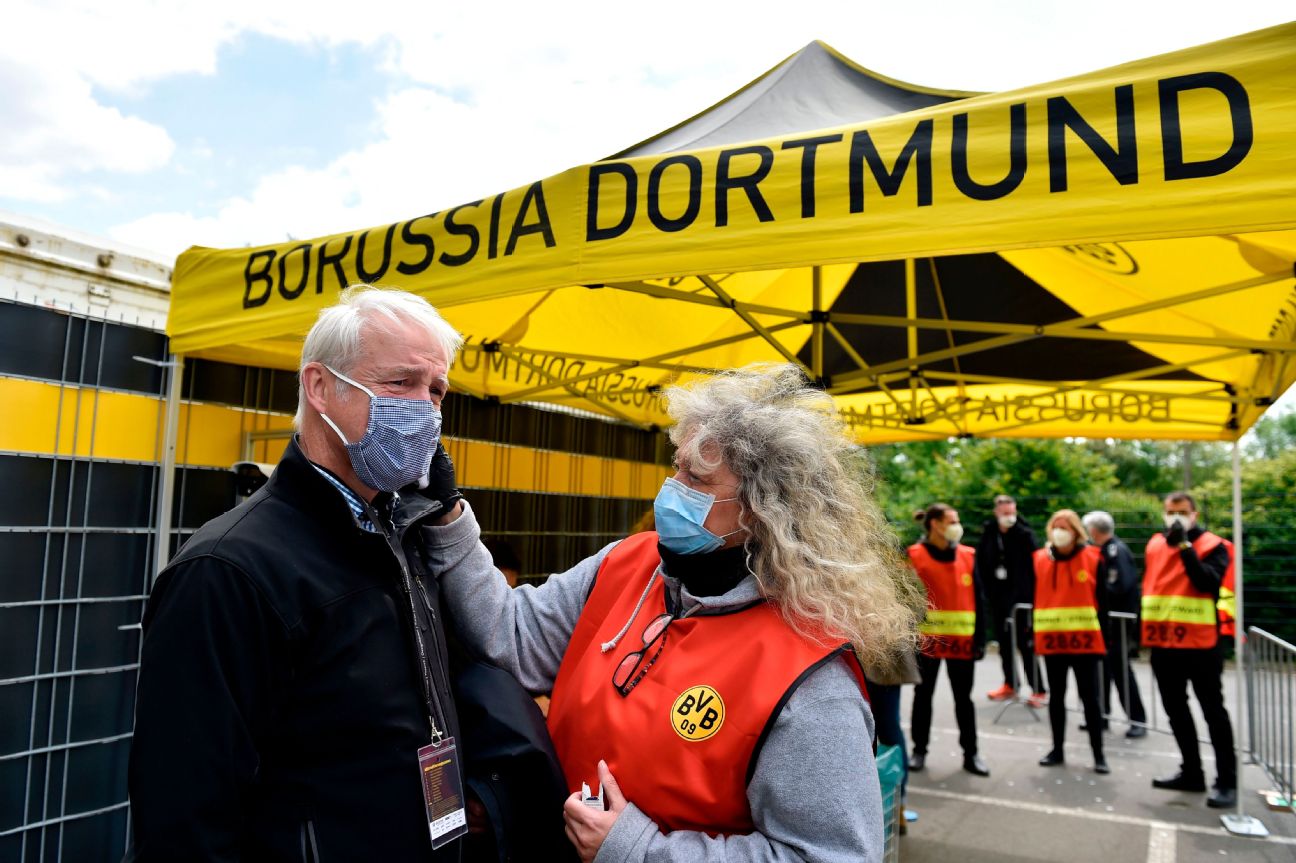 A member of the television crew has his temperature taken by a health official on his way into the stadium. 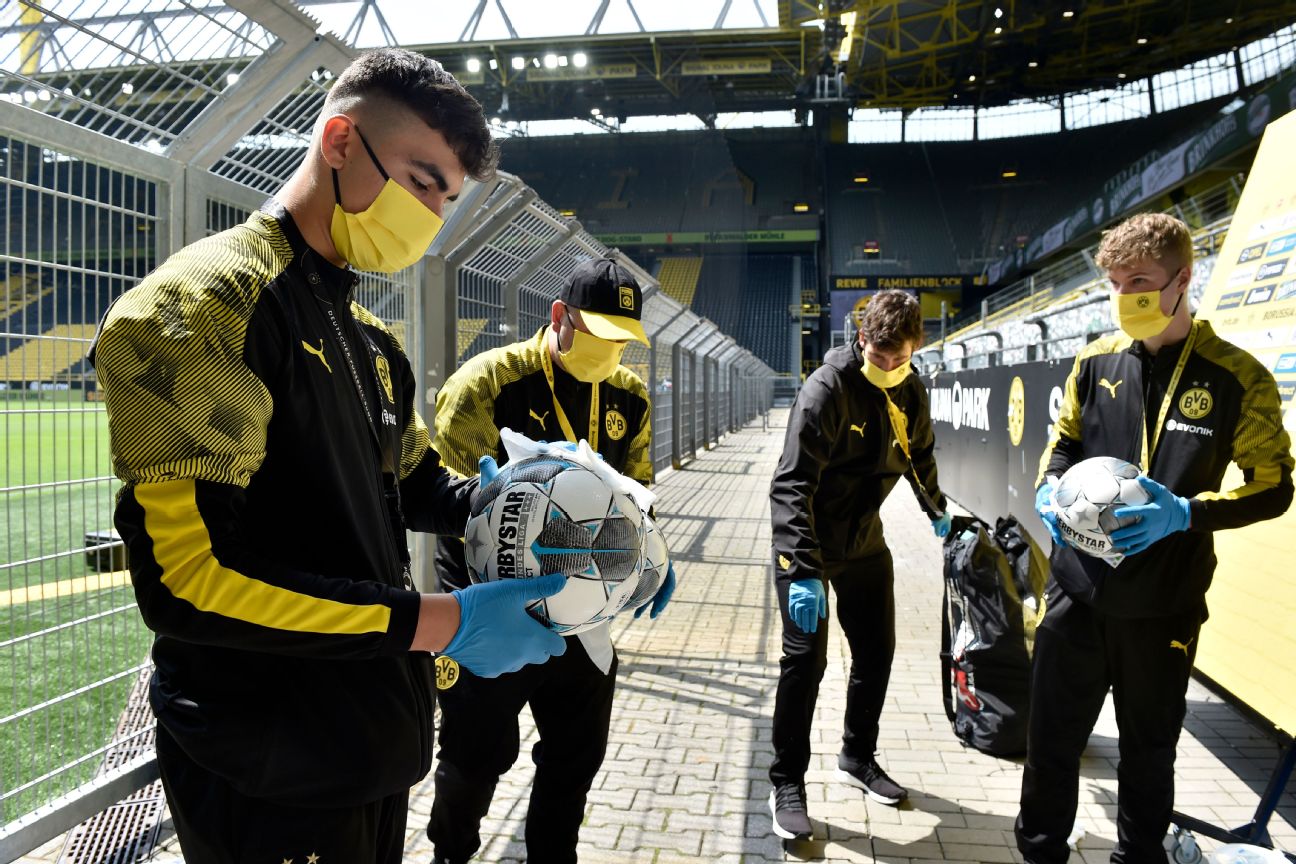 Dortmund’s ball boys disinfect the balls before the players emerge from the dressing room to warm up.

Schalke’s substitutes maintain a safe distance of two meters between themselves over on the sidelines. 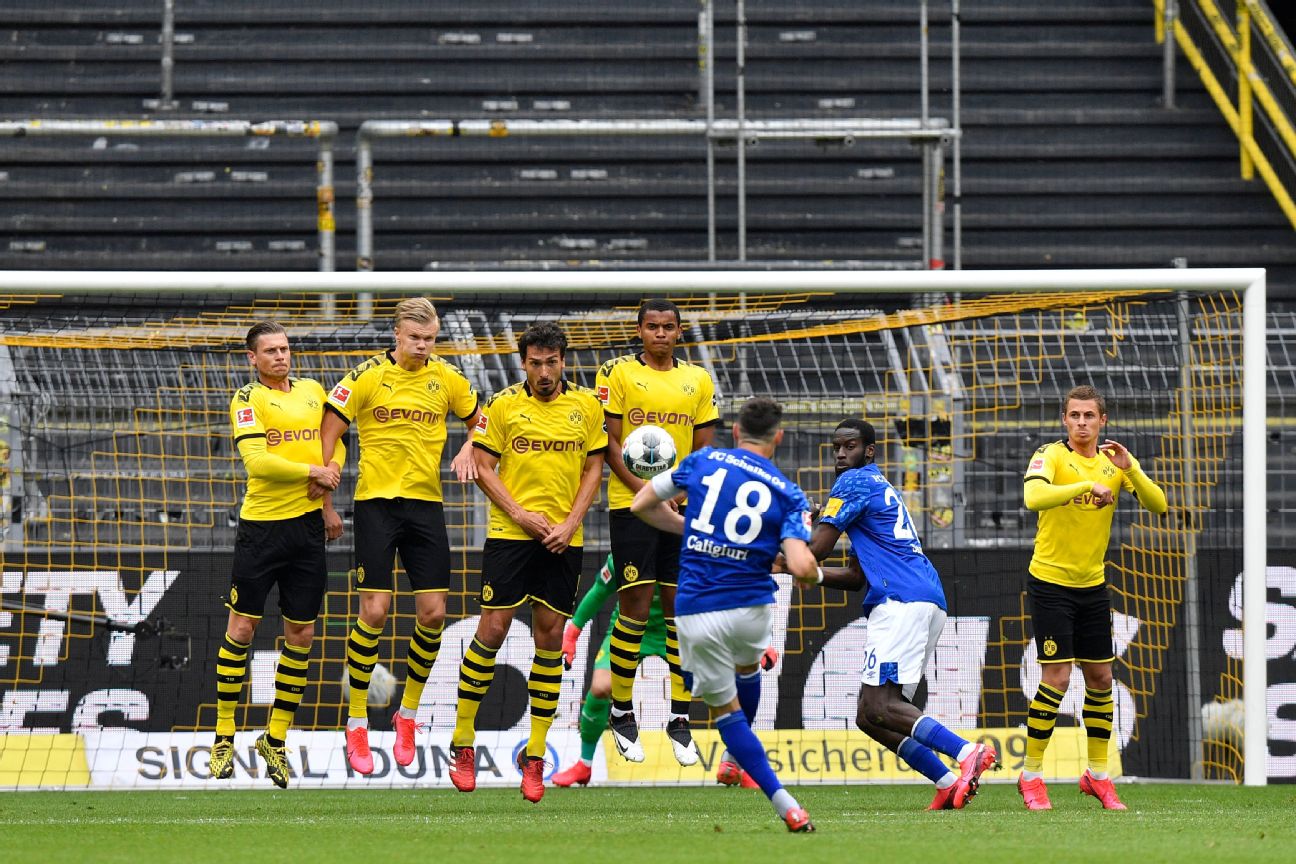 Schalke midfielder Daniel Caligiuri lets fly with a free kick in front of an empty stand where Dortmund’s famous “Yellow Wall” of supporters can usually be found. 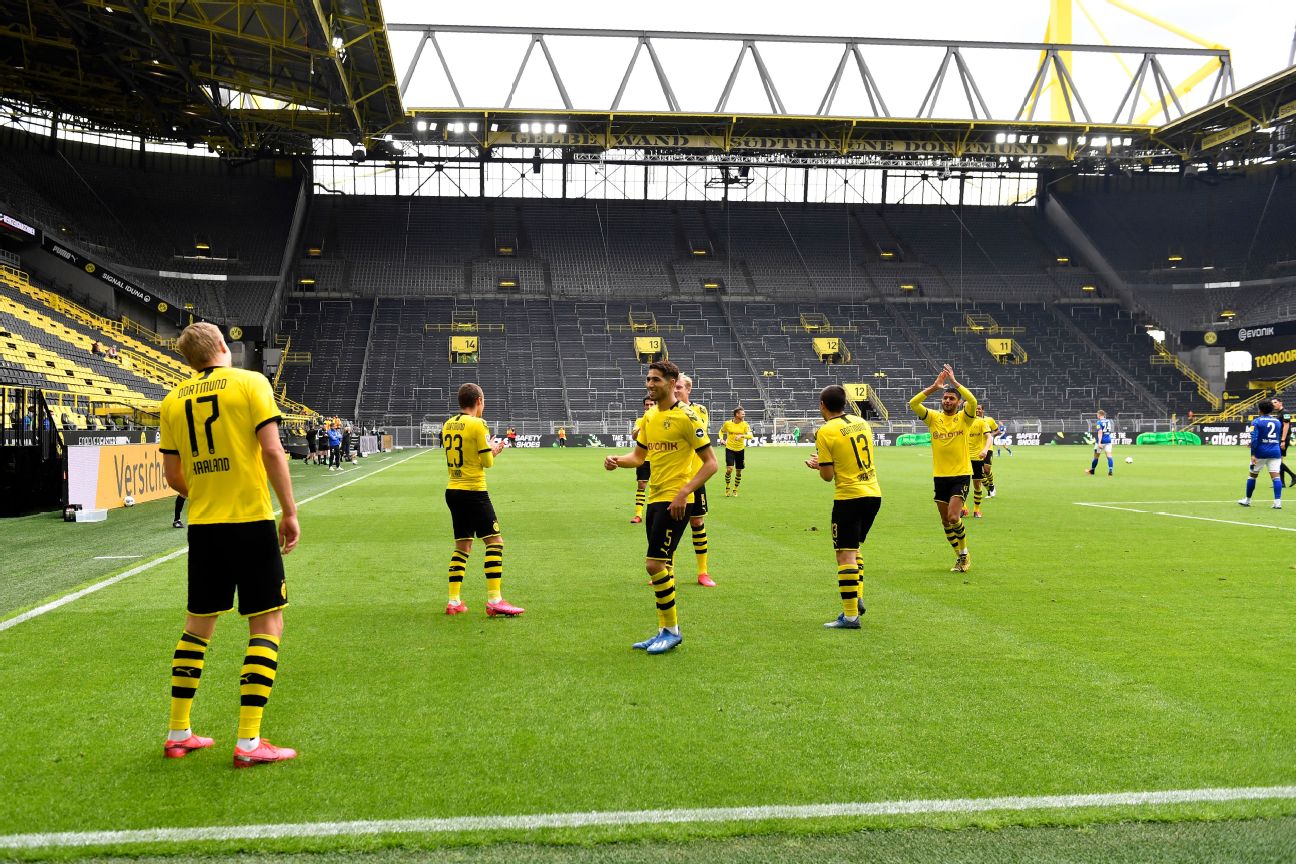 Dortmund striker Erling Braut Haaland celebrates scoring the opening goal while his teammates make sure to maintain social distancing between themselves.

In the background, the famous Sudtribune — in which thousands of yellow-and-black-clad fans would usually be creating a raucous din in celebration — stands silent and empty. 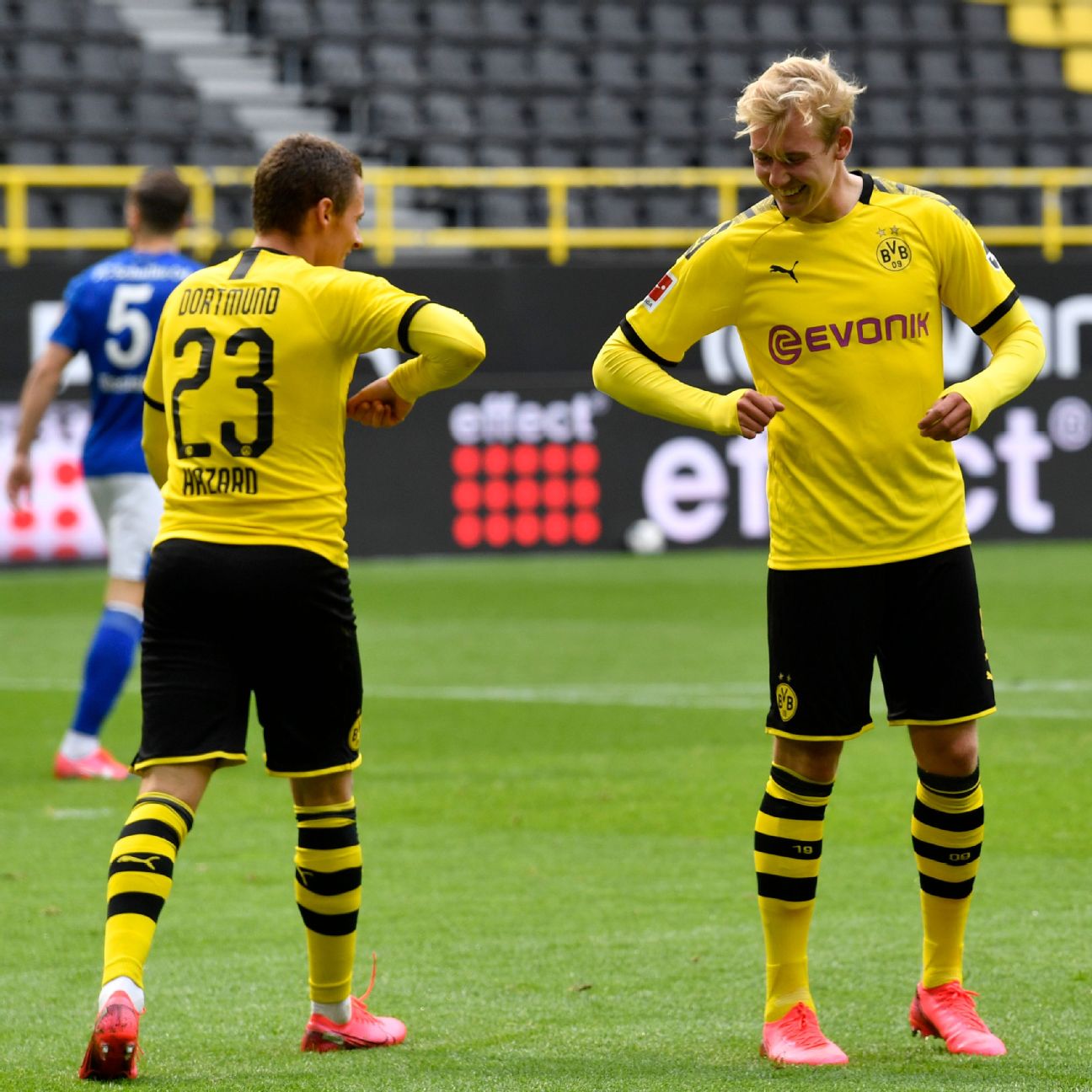 Thorgan Hazard and Julian Brandt celebrate the former scoring Dortmund’s third goal of the game with an elbow bump. 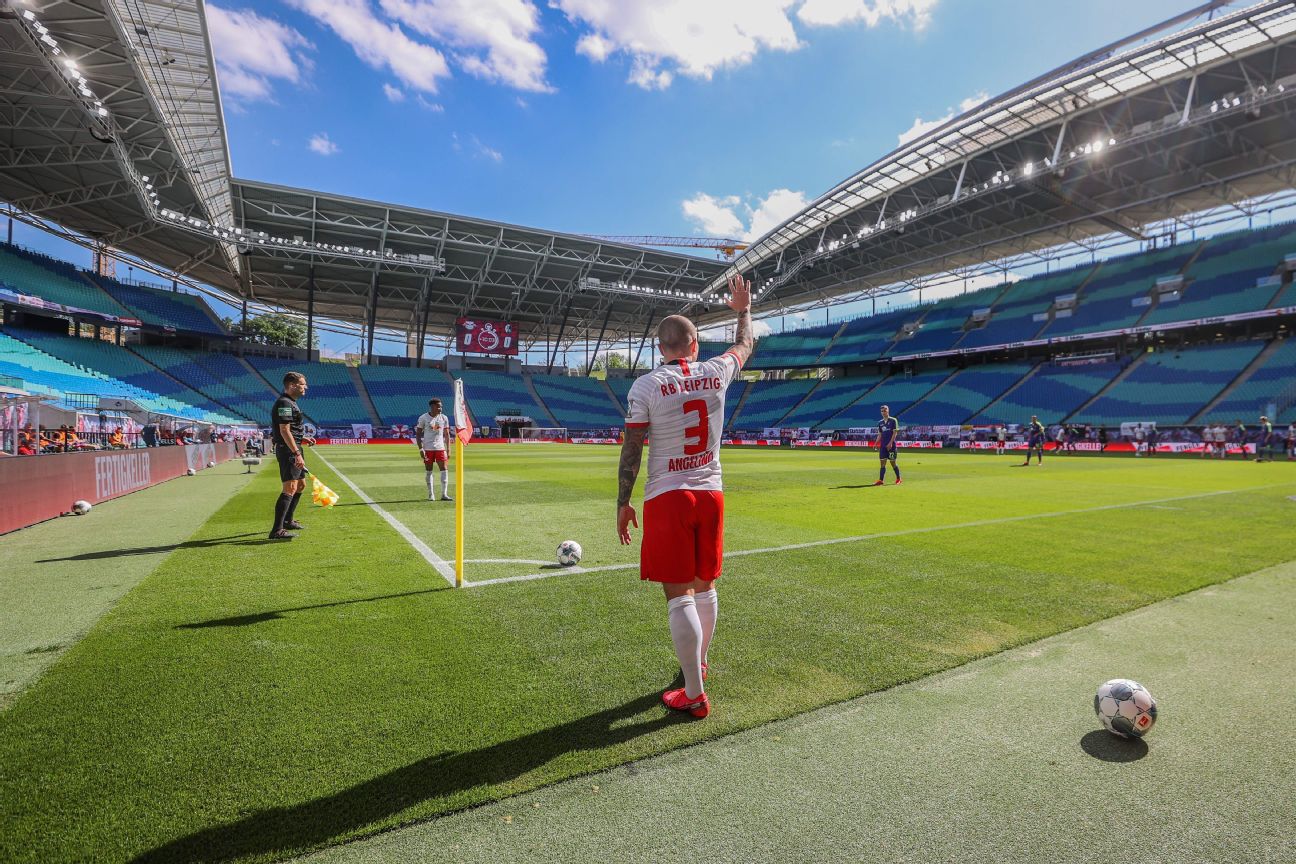 RB Leipzig defender Angelino prepares to launch a corner into the Freiburg penalty area in front of three empty stands. 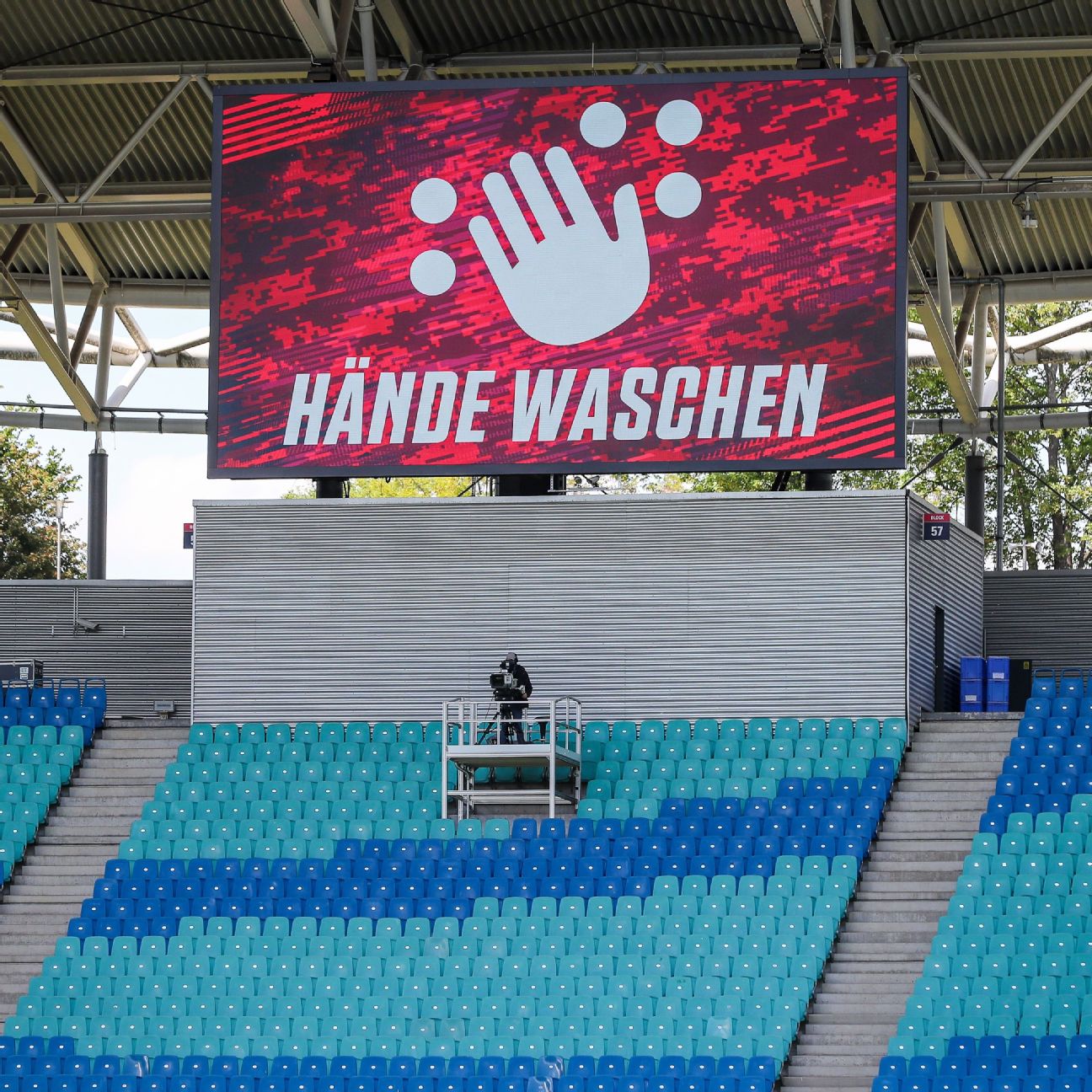 A giant screen urges everybody present to wash their hands during the match. 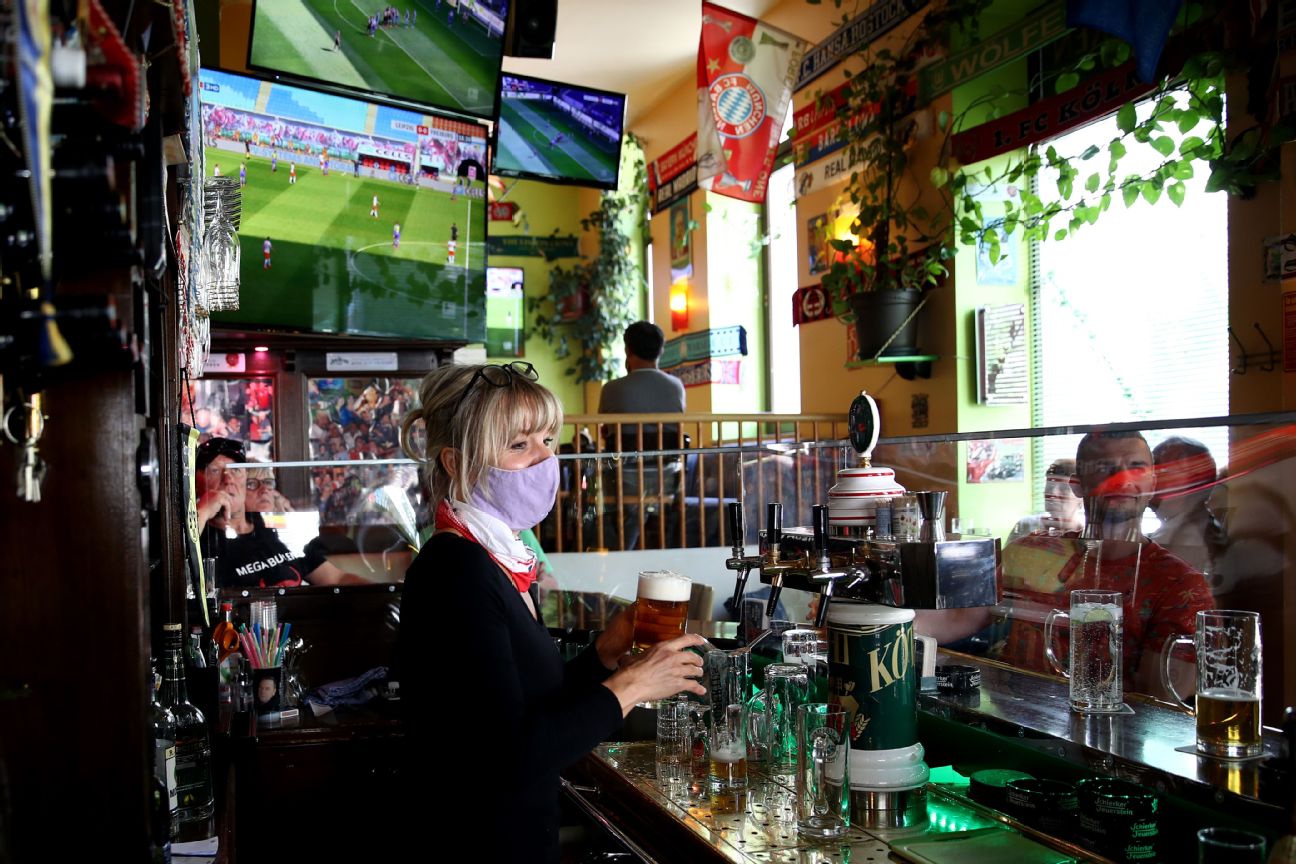 With matches happening behind closed doors, fans watch the game in a bar close to the ground. 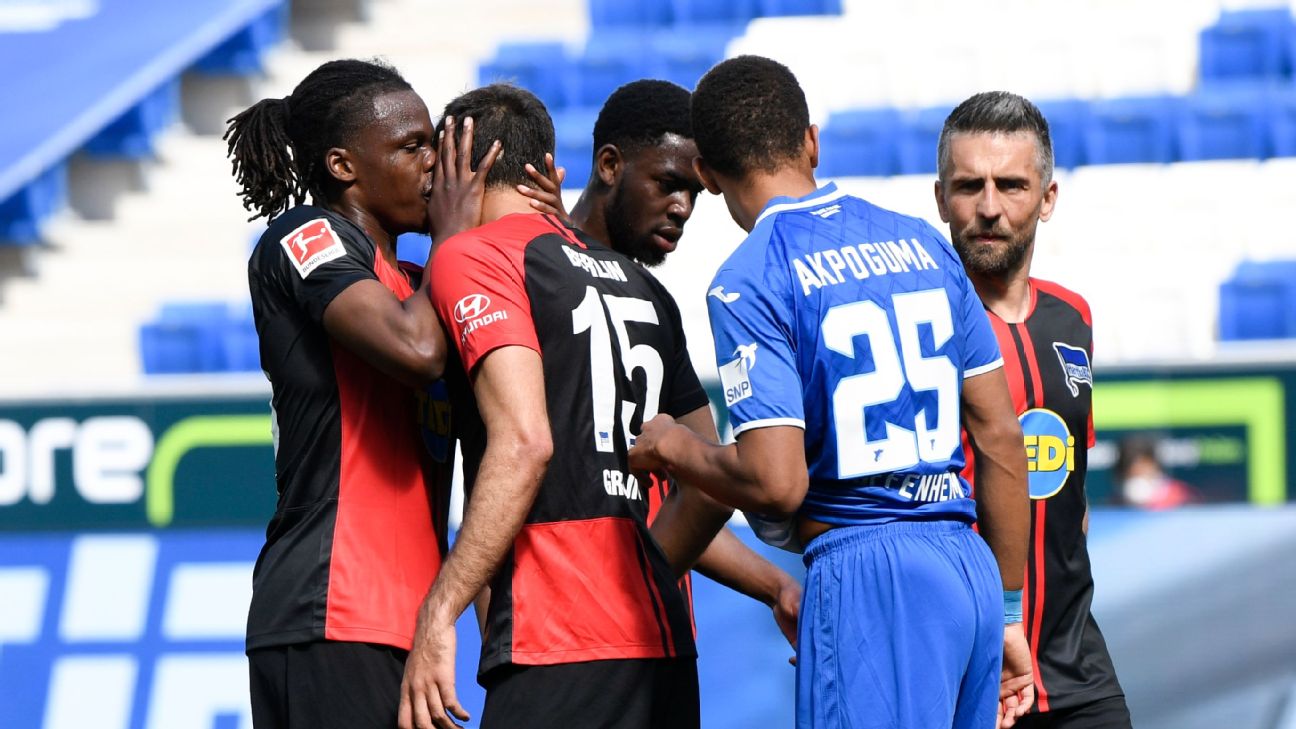 Dedryck Boyata gets a little too close for comfort to teammate Marko Grujic. 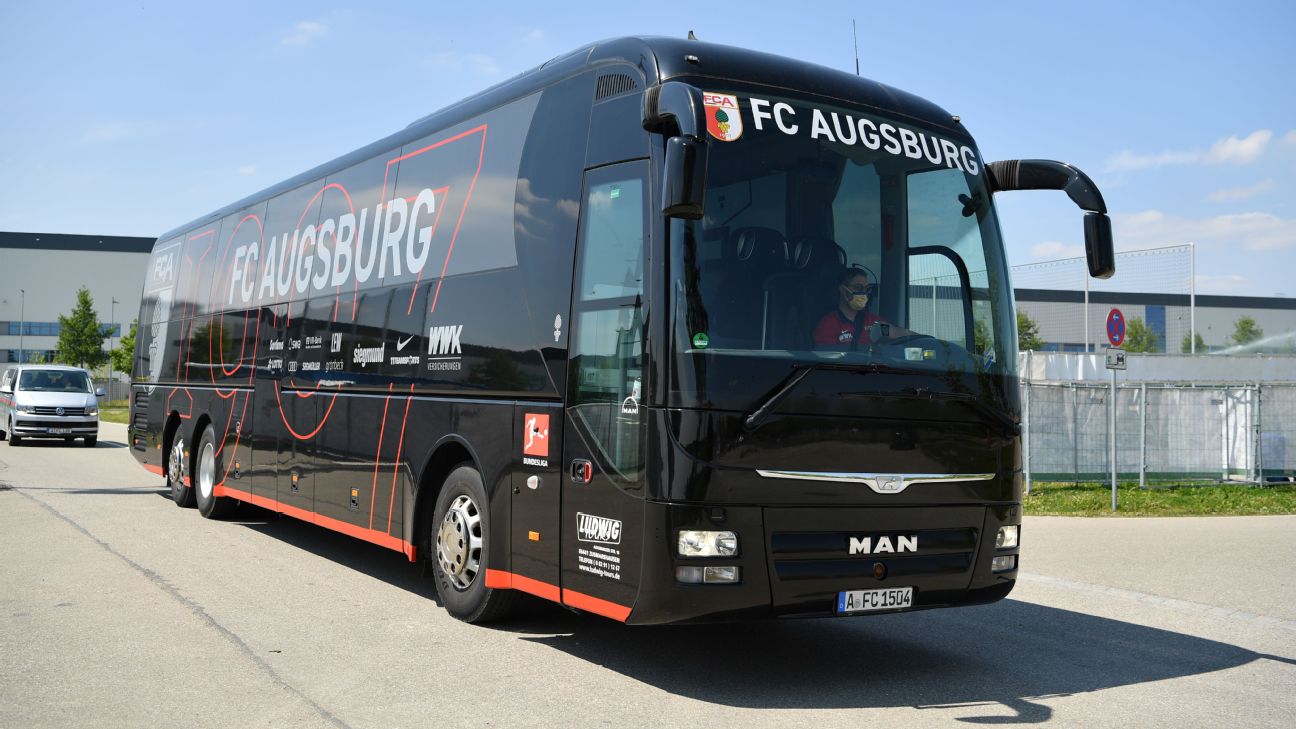 Augsburg’s team coach arrives for their game against Wolfsburg — slightly ironic as the home side were forced to play without their actual coach, Heiko Herrlich, after he was caught breaking strict quarantine rules at the team hotel in order to fetch a tube of toothpaste. 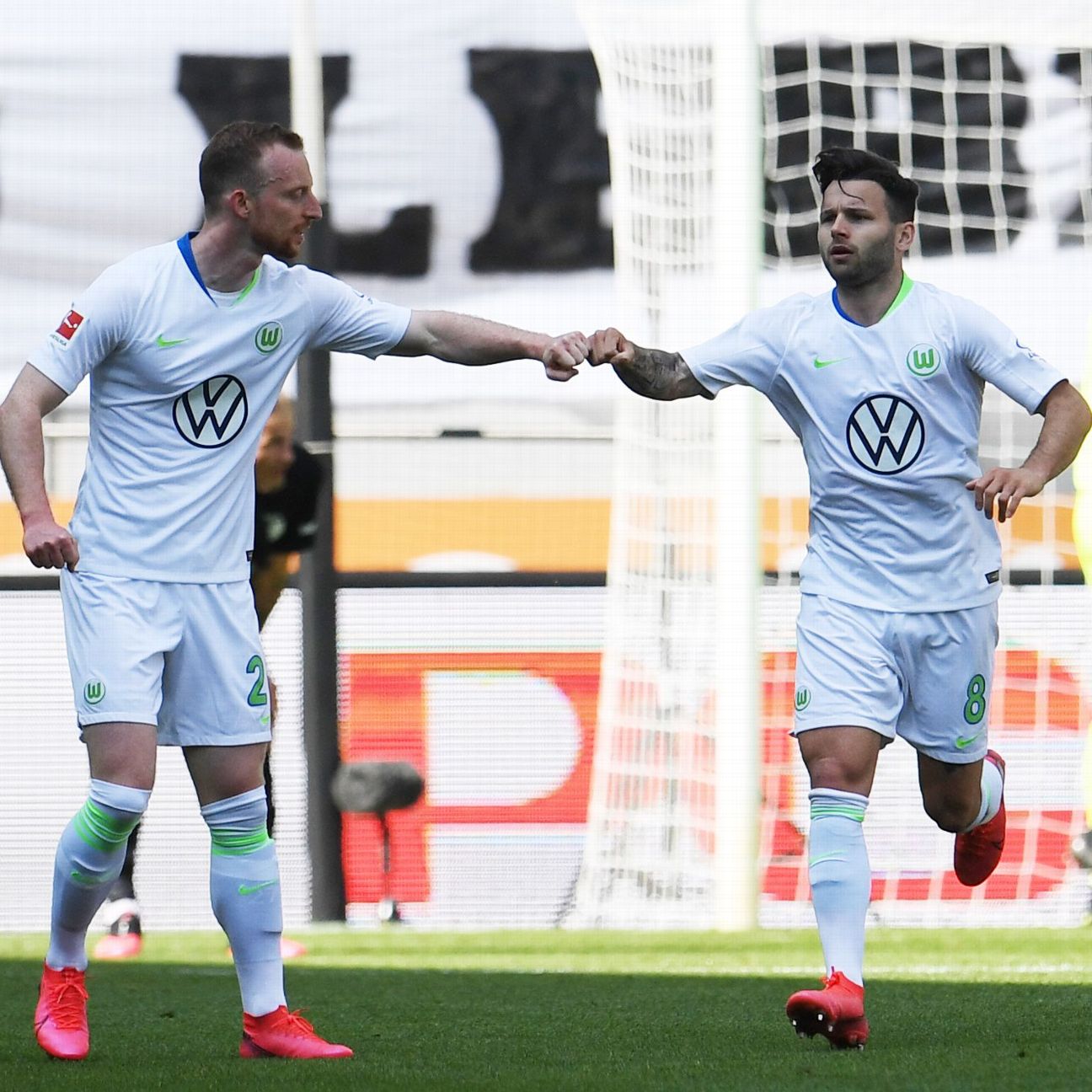 Wolfsburg players fist-bump to celebrate Renato Steffen’s goal, which may have broken the hygiene guidelines laid down by the German Football League (DFL). 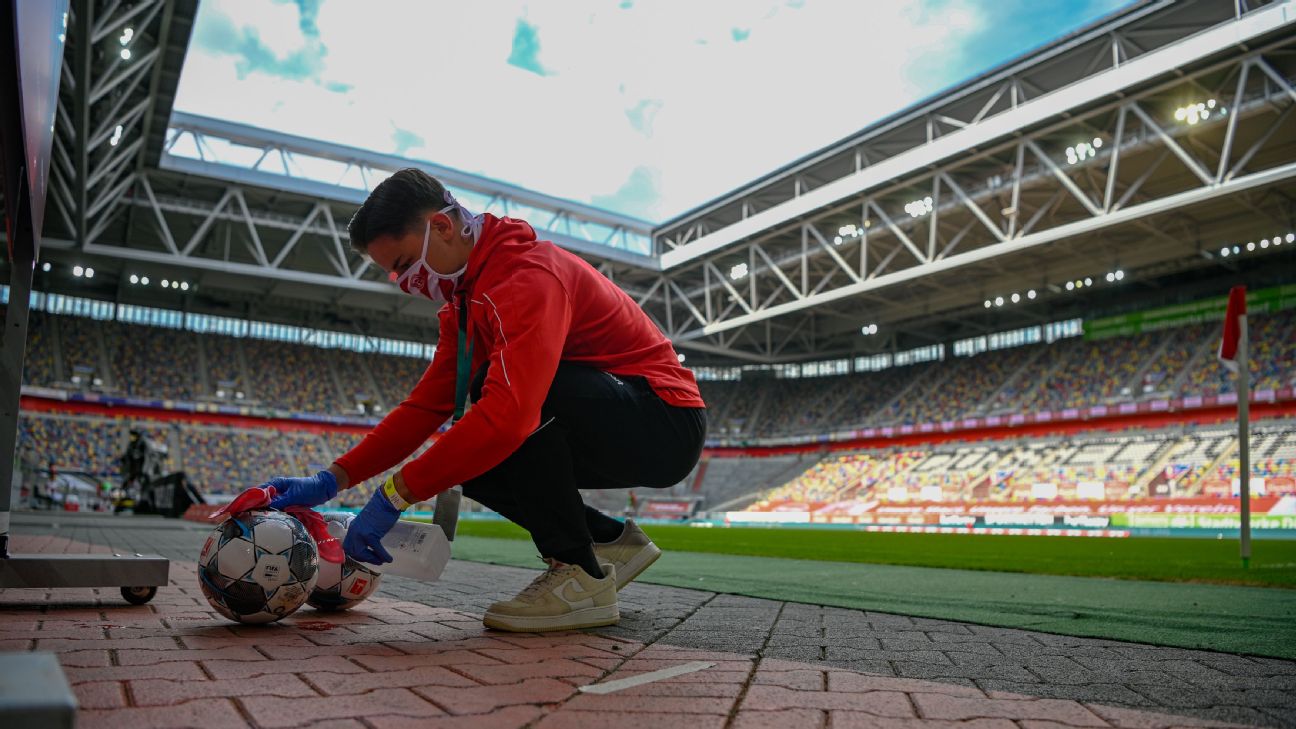 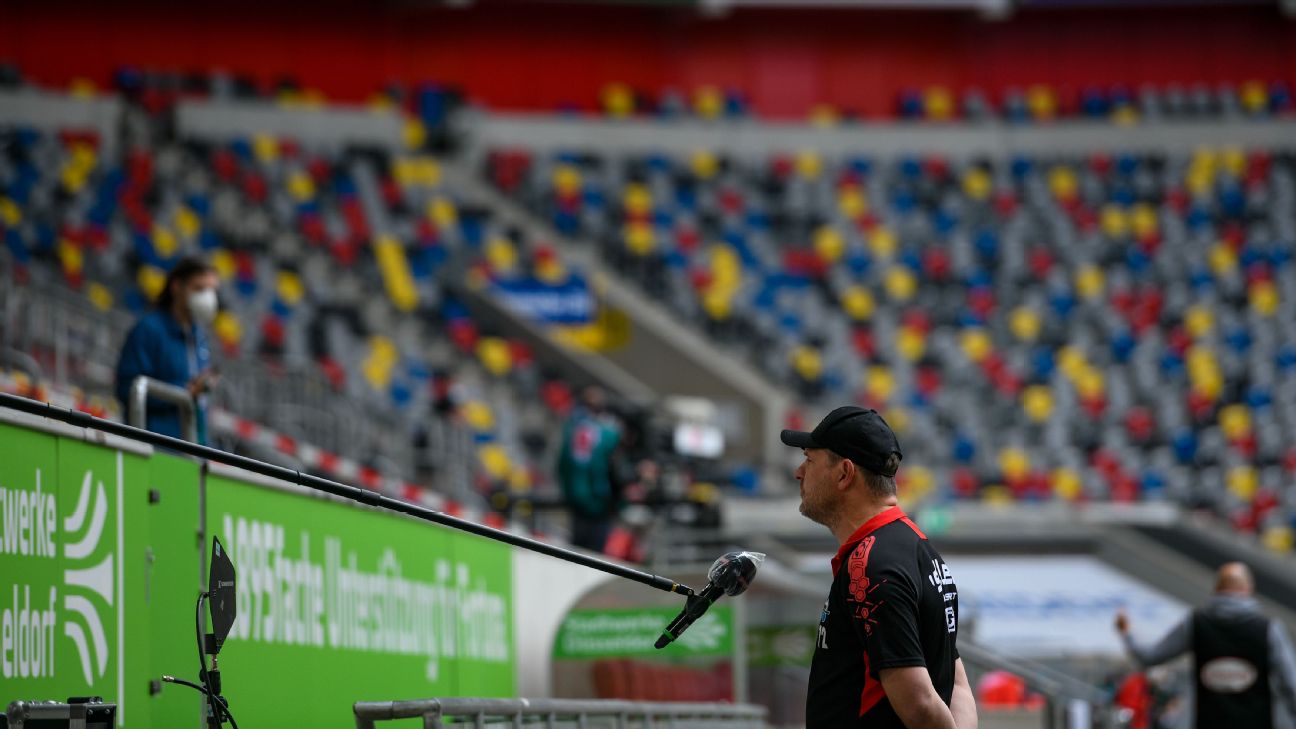 A TV interviewer (out of shot) takes no chances when conducting a pre-match interview with Paderborn coach Steffen Baumgart. 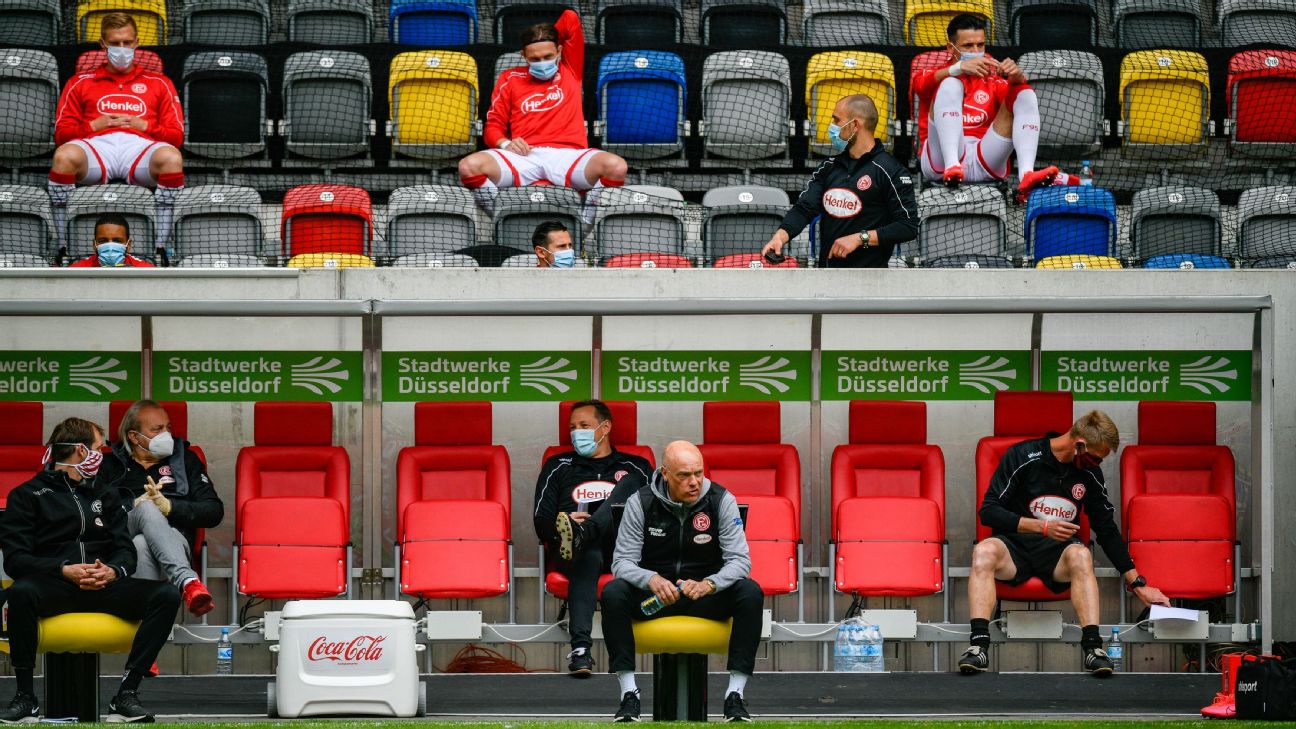 The requirement to have substitutes sit a safe distance apart led to an unusual double-decker arrangement.

Alassane Plea, Marcus Thuram and Ramy Bensebaini got the goals in an easy 3-1 Borussia Monchengladbach win at Frankfurt.